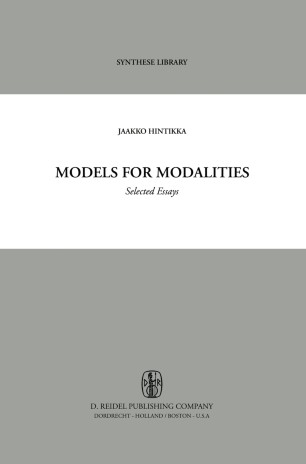 The papers collected in this volume were written over a period of some eight or nine years, with some still earlier material incorporated in one of them. Publishing them under the same cover does not make a con­ tinuous book of them. The papers are thematically connected with each other, however, in a way which has led me to think that they can naturally be grouped together. In any list of philosophically important concepts, those falling within the range of application of modal logic will rank high in interest. They include necessity, possibility, obligation, permission, knowledge, belief, perception, memory, hoping, and striving, to mention just a few of the more obvious ones. When a satisfactory semantics (in the sense of Tarski and Carnap) was first developed for modal logic, a fascinating new set of methods and ideas was thus made available for philosophical studies. The pioneers of this model theory of modality include prominently Stig Kanger and Saul Kripke. Several others were working in the same area independently and more or less concurrently. Some of the older papers in this collection, especially 'Quantification and Modality' and 'Modes of Modality', serve to clarify some of the main possibilities in the semantics of modal logics in general.