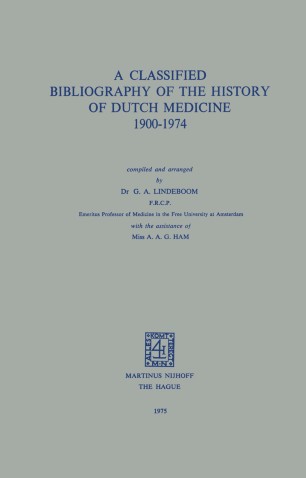 I. In some periods of the past Netherlands medicine has played a major role in the evolution of European medicine; today its history still enjoys much in­ terest even at the other side of the Ocean. In this bibliography it has been my endeavour to compile references for all that has been written on the history of Dutch medicine in our country and elsewhere in our age. The main concern of this work is with the medicine of the Northern Nether­ lands. However, before the end ofthe sixteenth century the Northern and South­ ern Netherlands were not yet divided into two separate countries; they were still politically one and for the greater part spoke the same Flemish language. So be­ fore their separation the present-day Belgium and Netherlands also had a com­ mon medical history. Therefore many entries have been included which bear on early (and sometimes later) Flemish medicine, but it has not been the inten­ tion to strive for completeness in this respect.