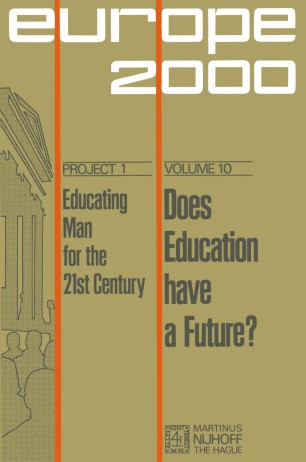 Does Education Have a Future?

The Political Economy of Social and Educational Inequalities in European Society

This volume has been prepared in the framework of Project 1: "Educating Man for the 21st Century" of Plan Europe 2000, sponsored by the European Cultural Foundation. While most of the studies launched under this Project deal with specific aspects or levels of education the present volume attempts to provide a more global view of educational futures and their relationships to alternative futures of the overall socio-economic system. It should not be considered as a general integration or synthesis· of the different studies of the Education Project of the European Cultural Foundation - although it draws on them as well as other recently published documents. Rather, it should be regarded as one of several possible approaches, analytical tools, and incentives to the study and open discussion of educational problems seen in a long-term perspective. The volume is the result of a collective effort of a multinational team of researchers. A colloquium of some sixty participants, meeting at the Uni­ versity of York in October 1972, provided critiques and comments to the first version of the report. But only the authors themselves claim responsibil­ ity for the methodology of the study, and the opinions and conclusions expressed therein. These do not necessarily reflect those of the sponsors of the volume, the European Cultural Foundation and the Scientific Committee of its Education Project. • Such a synthesis will appear as the concluding report of the Project.