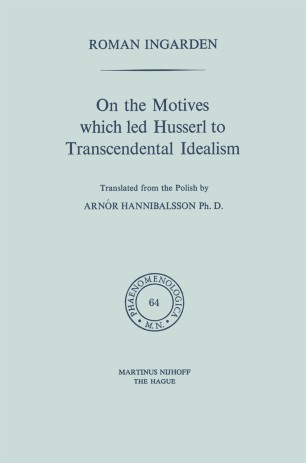 On the Motives which led Husserl to Transcendental Idealism

Roman Ingarden studied under Husserl before and during the first world war. He belonged to the so-called Gottingen group of Husserl's pupils. Husserl's doctrine was accepted by them and interpreted in a realist vein. Ingarden defended this view all his life. He opposed the development of phenomenology towards idealism. A considerable part of Ingarden's great creative effort is dedicated to the construction of a realist phenomenology and thus, according to him, to continuing the erection of the theoret­ ical structure whose foundations were laid by Husserl in his Logical Investigations. From Ingarden's standpoint the question of idealism versus realism was a crucial one. Ingarden published several studies on Husserl. The first one was written in 1918 and the last one was published posthumously. The present essay was printed in Ingarden's book Z badan nad filozofi:t­ wsp61czesn:t- (Inquiries into Contemporary Philosophy 1963) along with a number of other essays on Husserl and his philoso­ phy. This one is representative for Ingarden's positions. It is a good example of his contribution to an important controversy in the history of phenomenology, and it gives the reader an idea of Ingarden's critique of Husserlian idealism against the background of his argument for realism. Thanks and acknowledgements are due to Mr. J. E. Llewelyn of Edinburgh University. This translation was undertaken in collaboration with him. Arn6r Hannibalsson K6pavogur, Iceland 2I. II.