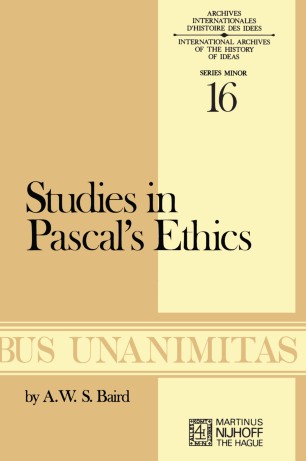 The aim of these studies is to show how Pascal's moral outlook reflects the influence on his thought of the basic doctrine of the three orders. This does not mean that an attempt is made to classify all Pascal's moral judgements in order to relate them to that doctrine. The intention is rather to dIstinguish the different moral stances Pascal takes, and to ascertain how far the apparent inconsistencies between them can be explained, if not reconciled, in the light of the orders. It is made clear at the outset how the three orders form the framework of Pascal's scale of values, with the different orders representing at once categories of moral value and orders of being. The peculiar nature of this scale, in which moral and ontological values coalesce, calls for a double criterion, or variable, to allow for differences both of degree and of kind. Since the criterion of rank in the scale is reality, the assigning of value becomes largely a question of perspective: a quality from a given order taken by itself is real, and has moral value, but when compared with a quality from a higher order it loses both its reality and its worth.