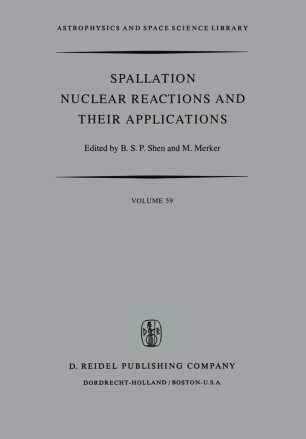 Spallation Nuclear Reactions and their Applications

Nine years ago, in 1967, a conference on spallation nuclear reactions and their applications in astrophysics was held at the University of Pennsylvania. I Since that time, a number of devel­ opments have given renewed impetus to the study of spallation reactions. Among these are the successful acceleration of high­ energy heavy ions in the laboratory and their potential use in cancer radiotherapy, the availability of returned lunar rocks containing records of past cosmic-ray irradiation, and the devel­ opment of the theory that the spallation of interstellar matter is responsible for much of the observed universal abundances of the rare light nuclides. In May 1975, a new conference on spal­ lation nuclear reactions and their applications to astrophysics and radiotherapy was organized and held, again at the University of Pennsylvania. The papers in this volume are primarily expanded and updated versions of invited papers given at that conference. To the authors of the papers, we owe a debt of gratitude for their contributions and for their forbearance. The confer­ ence itself was much stimulated by the services of the four session chairmen: William A. Fowler, Serge A. Korff, Robert Serber, and Maurice M. Shapiro, each of whom has over the years made fundamental contributions to the subject matter of this volume. Crucial support for much of the editorial work was provided by the National Aeronautics and Space Administration and the National Science Foundation. George W.