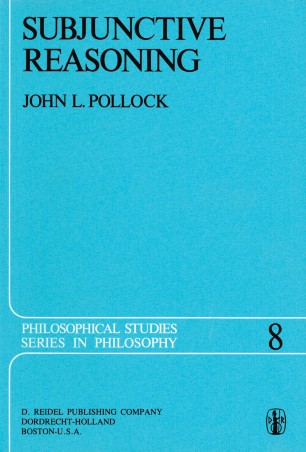 I am indebted to many people for the help they gave me in the writing of this book. lowe a large debt to David Lewis and Robert Stalnaker, on both general and specific grounds. As becomes apparent from reading the notes, the book would not have been possible without their pioneering work on subjunctive conditionals. In addition, both were kind enough to provide specific comments on earlier versions of different parts of the book, and Stalnaker read and commented on the entire manuscript. Closer to home, I am indebted to my colleagues Rolf Eberle and Henry Kyburg, Jf. , my erstwhile colleague Keith Lehrer, and numerous graduate students for their helpful comments on various parts of the manuscript. Some of the material contained herein appeared first in the form of journal articles, and I wish to thank the journals in question for allowing the material to be reprinted here. Chapter One contains material taken from 'The "Possible Worlds" Analysis of Counter-factuals', published in Phil. Studies 29 (1976), 469 (Reidel); Chapter Two contains material much revised from 'Four Kinds of Conditionals', Am. Phil. Quarterly 12 (1975), and Chapter Three contains much revised material from 'Subjunctive Generaliza­ tions', Synthese 28 (1974), 199 (Reidel). CHAPTER I INTRODUCTION 1. SUBJUNCTIVE REASONING There exists quite a variety of statements which are in some sense 'subjunctive'.