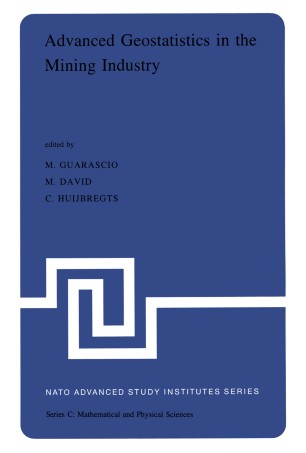 Advanced Geostatistics in the Mining Industry

Proceedings of the NATO Advanced Study Institute held at the Istituto di Geologia Applicata of the University of Rome, Italy, 13–25 October 1975

When Prof. Hatheron was asked to delineate the history of geostatistics, he objected that such discipline is still too "young" to be treated from a historical point of view. The more and more increasing practical applications requiring newer and newer methodologies would rather suggest the necessity of empha­ sizing the steps taken and the results obtained up to now. The reason of certain epistemological choices as well as the difficul­ ties and success in establishing a dialogue with the people most likely to benefit from the results of geostatistics are necessary premises to understand the present status of this discipline. The human bearing of characters of the persons that have introduc­ ed and studied this science blending theory with economic prac­ tics is a factor playing a not inconsiderable role in the develop­ ment of geostatistics. These concepts were the guidelines in organizing the ASI-Geo­ stat 75. Canada, France and Italy are three different situations in an industrial and academic context, especially in the interac­ tion between these fields. Yet it was our impression that the time had come to assemble experts, scholars, and other people in­ terested in geostatistics in order to evaluate its present posi­ tion on various levels in the different countries and to discuss its future prospects. Prof. Hatheron and Hr. Krige as well as other prominent people were of the same opinion.