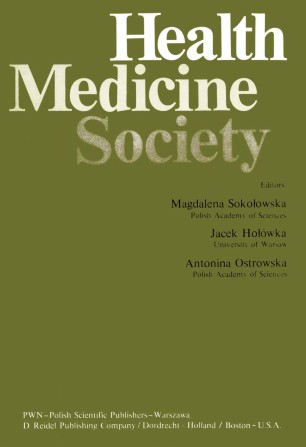 This volume contains a selection of papers presented at the International Conference on the Sociology of Medicine, held between August 20th and 25th, 1973 in Warsaw (Jablonna). * The Conference was organized by the Institute of Philosophy and Sociology of the Polish Academy of Sciences in collaboration with the Research Committee on the Sociology of Medicine of the Inter­ national Sociological Association. The participants included medical sociologists from the United States, and from the countries of Western and Eastern Europe, including a delegation ,of general sociologists and physicians and also a group of young medical sociologists from Poland. Dr. Leo Kaprio, Director of the Regional Office for Europe of the Wodd Health Organization, together with a member of his staff, was also present. The Conference was opened by the Deputy Minister of Health and Social Welfare of the Polish People's Republic, Dr. Ryszard Brzozowski. The first Chairman was Prof. Jan Szczepanski, Vice­ President of the Polish Academy of Sciences and Director of the Institute of Philosophy and Sociology. The first speech was delivered by Prof. Jivko Oshavkov from Bulgaria, then Vice-Chairman of the International Sociological Association. The Conference had several objectives which, we believe, were suc­ cessfully achieved. It was intended first to provide an occasion to bring participants of East and West together, and give them a chance to exchange information on the state of medical sociology in different countries.