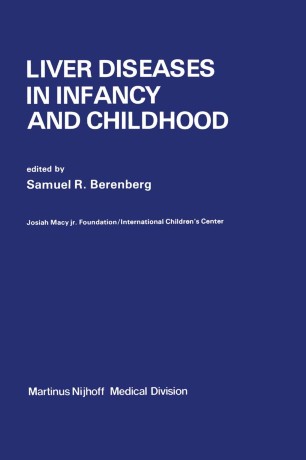 Liver Diseases in Infancy and Childhood

For almost four decades the Josiah Macy, Jr. Foundation has been con­ vening conferences relating to medicine, medical education, and health care in their broadest contexts. During the 1940s and 1950s the conferences focused on biomedical research, which was at that time in its golden age in the United States. As medical care and medical education ascended in importance, since the mid-1960s the conferences have been largely con­ centrated on topics in these fields. The Macy Foundation also fosters international conferences, and a major effort in recent years has been a rewarding collaboration with France's most distinguished medical statesman, Professor Robert Debre, and the Inter­ national Children's Centre in Paris, which he founded and directs. Nineteen seventy-five was an especially busy year for this Franco-American alliance: in April there was a seminar on 'The Family Doctor: France and the United States'; and, in June, a conference on 'Diseases of the Liver in Infancy and Childhood'. Earlier Franco-American conferences have been on 'Brain Development' (1972) and on 'Puberty' (1974). As with the others the participants in this conference on Liver Disease in Infancy and Childhood were drawn from the United States and Europe. We were especially pleased to have as three of the participants men who hold sabbatical awards as Macy Foundation Faculty Scholars, Ivan Dia­ mond, M.D., Ph.D., Thomas Starzl, M.D., Ph.D. and M. Michael Thaler, M.D.