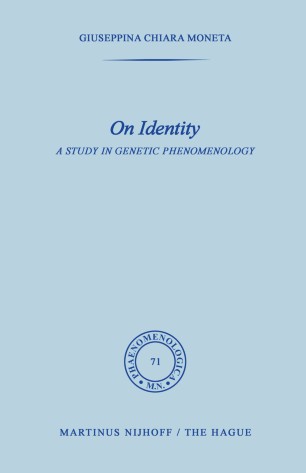 A Study in Genetic Phenomenology

of A first attempt to formulate the phenomenological problem identity was originally made in my doctoral dissertation, "The Identity of the Logical Proposition," (Graduate Faculty, New School for Social Research, 1969). Further development of the problem, both direct and indirect, as well as extensive revision, has found expression in "The Foundation of Predicative Experience and the Spontaneity of Consciousness" (Life-World and Consciousness. Essays for Aron Gurwitsch, 1972), "Gurwitsch's Concept of Per­ ceptual Unity as the Basic Form of Rational Consciousness," (Social Research, April, 1975), and "The Refinement of the Concept of Constitution" (Research in Phenomenology, Vol. IV, 1974). These studies, in turn, formed the springboard for the present study of the problem of identity. No more than the other studies, this study far from claiming finality, is rather an ever-widening beginning of a phenomenological inquiry into the constitution of identity. I am enormously indebted to my friend and colleague, Professor Fred Kersten of the University of Wisconsin at Green Bay. No tribute is sufficient to acknowledge his invaluable assistance and counsel in the preparation of this work for publication. I would also like to thank Professor Werner Marx of the University of Freiburg for his sustaining encouragement in the later phase of this work. INTRODUCTION The purpose of this essay is to investigate the meaning of the concept of identity within a framework of the phenomenological theory of consciousness.