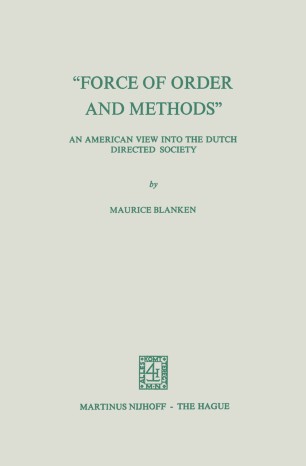 “Force of Order and Methods ...” An American View into the Dutch Directed Society

The Netherlands is an unusual nation in many ways. It is not only that nearly half her land is below sea level. Nor is it that she is one of the world's most crowded lands; her more than 13 million people create a population density of about 1000 per square mile. Nor is it that half her national income is dependent upon world trade. Nor is it that so small a nation could achieve peace and prosperity with so little natural resources. What is most unusual is that the Netherlands has made such a rapid and total adjustment to the demands of modern technological society. In no small measure this was achieved by a deliberate policy of planning, direction, control and development. Its postwar history tells how a determined people under intelligent govern­ ment leadership rose from a broken economy to a level of economic and social development that places their society among the most modern in the world. The Netherlands is a success stor} that in some measure has been overlooked by a wider world. This will be an attempt to record her story, touching upon some of the causes and results of this success. The Netherlands is undoubtedly one of the most planning conscious of modern nations. This is not to say that the Dutch government or its people have any concept comparable to the totality of Soviet Five Year It might be more accurate to see Dutch planning as similar to Plans.