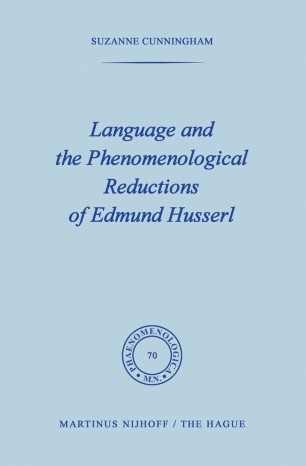 Language and the Phenomenological Reductions of Edmund Husserl

It was while reading HusserI's Cartesian Meditations that the subject of the present volume first occurred to me. And in a way I am offering a somewhat oblique commentary on HusserI's Meditations - "oblique" because it is not a systematic elucidation of the entire text. Nonetheless, it is primarily with the task of the Meditations that I am concerned. It is there that the antipathy between natural ~anguage and HusserI's quest for certainty come clearIy into focus. (Other texts are cited insofar as they shed light on this central work or illustrate the fact that HusserI did not significantly alter his position on the problem. ) My purpose here is to further sharpen that focus, showing that the consciousness within the phenomenological reductions is essentially language­ using. Working with the Wittgensteinian insight regarding "pri­ vate languages," I attempt to show that a language-using con­ sciousness cannot effectively divorce itself from its social context and is unable, therefore, to perform the radical phenomenological reductions. Solipsism, then, is never a genuine problem, but nei­ ther is the elimination of all existential commitments a genuine possibility. Finally, I conclude that language-use bridges the distinction between essence and existence, the transcendental and the transcendent, the ideal and the real-making the phenomeno­ logical method incapable of providing the apodictic foundations on which all metaphysics and science will be rebuilt.