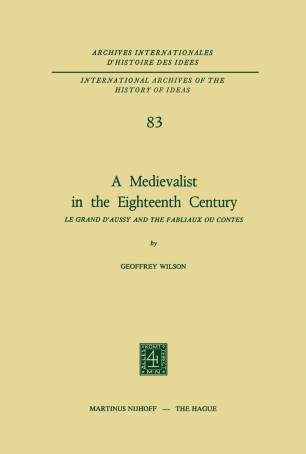 A Medievalist in the Eighteenth Century

It is a common belief that in France the study of medieval literature as literature only began to gain recognition as a valid occupation for the scholar during the nineteenth century. It is well known that historians of the sixteenth, seventeenth and eighteenth centuries looked to the literary productions of the Middle Ages for materials useful to their researches, but it is only recently that the remarkable frequency of this reference has been appreciated and that scholars have become aware of an unbroken tradition of what might best be described as historically ori ented medievalism stretching from the sixteenth century to our own. The eighteenth century has drawn the greatest number of curious to this field, for it is evident that the surprisingly extensive researches undertaken then do much to explain the progress made a century later by the most celebrated generation of medievalistst. Very slowly we are coming to see the value of the contribution made by little known schol­ ars like La Curne de Sainte-Palaye, Etienne Barbazan and the Comte de Caylus.