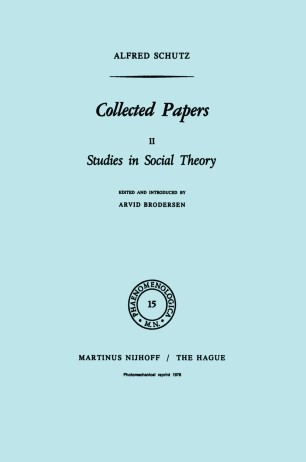 Elsewhere 1 we were concerned with fundamental aspects of the question how man can comprehend his fellow-men. We analyzed man's subjective experiences of the Other and found in them the basis for his understanding of the Other's subjective processes of consciousness. The very assumption of the existence of the Other, however, introduces the dimension of intersub­ jectivity. The world is experienced by the Self as being inhabited by other Selves, as being a world for others and of others. As we had occasion to point out, intersubjective reality is by no means homogeneous. The social world in which man finds himself exhibits a complex structure; fellow-men appear to the Self under different aspects, to which correspond different cognitive styles by which the Self perceives and apprehends the Other's thoughts, motives, and actions. In the present investigation it will be our main task to describe the origin of the differentiated structures of social reality as well as to reveal the principles underlying its unity and coherence. It must be stressed that careful description of the processes which enable one man to understand another's thoughts and actions is a prerequisite for the methodology of the empirical social sciences. The question how a scientific interpretation of human action is possible can be resolved only if an adequate • From: De, sinnha/te A II/ball tler sowuen WeU, Vienna, 1932; 2nd ed. 1960 (Sektion IV: Strukturanalyse der Sozialwelt, Soziale Umwelt, Mitwelt, Vorwelt, English adaptation by Professor Thomas Luckmann.