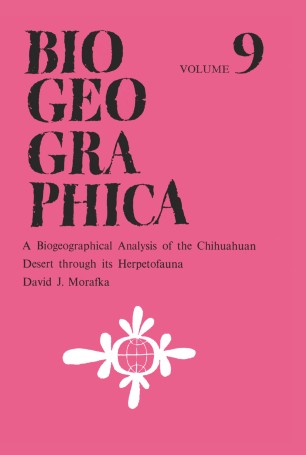 A Biogeographical Analysis of the Chihuahuan Desert through its Herpetofauna

The Mexican Plateau, in its magnificent dimensions and material wealth, stood among the first and perhaps most alluring discoveries of European explorers. Bur­ ied deeper in the verbal histories of a now vanquished people, the American Indians, must be the primordial human awareness of the inverted complex triangle that dominates the Mexican topography, climate and biota. It always has been viewed by man as a source of wealth and a center of authority. The plateau is the pillar upon which all Mexican conquerors have erected their capitols, tilled their crops and mined for their treasure, and from which they dispersed the forces of their authority. Ironically, the same size and diversity that give the plateau its value, also make it an immense barrier. Its broad desert and three to five thousand meter high crests constitute severe obstacles in the path of North American man. What has just been said of mankind in general, can be applied to the biologist in particular. He too has termed the goliath southern plateau as the crucible of the arid biotas of the continent (i. e. , 'Madro-Tertiary'). The biologist found the plateau to be a region of tremendous richness and diversity. But he also has been inhibited both physically and intellectually by its high mountain and vast desert barriers.