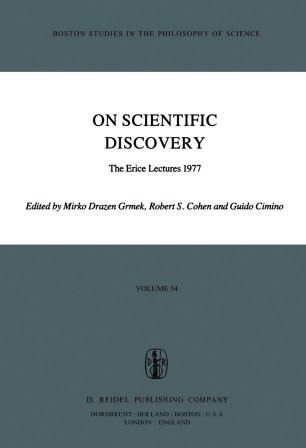 Part of the Boston Studies in the Philosophy of Science book series (BSPS, volume 34)

The 1977 lectures of the International School for the History of Science at Erice in Sicily were devoted to that vexing but inexorable problem, the nature of scientific discovery. With all that has been written, by scientists themselves, by historians and philosophers and social theorists, by psycholo­ gists and psychiatrists, by logicians and novelists, the problem remains elusive. Happily we are able to bring the penetrating lectures from Erice that summer to a wider audience in this volume of theoretical investigations and detailed case studies. The ancient and lovely town of Erice in Northwest Sicily, 750 m above the sea, was famous throughout the Mediterranean for its temple of the goddess of nature, Venus Erycina, said to have been built by Daedalus. As philosophers and historians of the natural sciences, we hope that the stimulating atmo­ sphere of Erice will to some extent be transmitted by these pages. We are especially grateful to that generous and humane physician and historian of science, Dr. Vincenzo Cappelletti, himself a creative scientist, for his collaboration in bringing this work to completion. We admire his intelligent devotion to fostering creative interaction between scientists and historians of science as Director of the School of History of Science within the great Ettore Majorana Centre for Scientific Culture at Erice, as well as for his imaginative leadership of the Istituto della Encic10pedia Italiana.