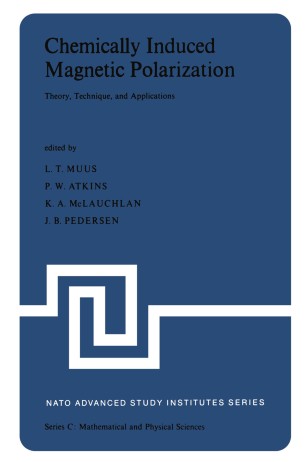 Magnetic resonance has constantly been able to surprise with its ability to exhibit new phenomena. Just when it appears to be entering a quiet middle age it bursts into activity with some new manifestation of its versatility. This happened a few years ago, when observations on anomalous intensities were looked at more closely, and the pursuit of explanations and further evidence laid the foundations of the subjects treated in this volume. In organizing the NATO Advanced Study Institute we attempted to bring together a number, but by no means all, of those who had contributed significantly to the subject, and to obtain from them a comprehensive and detailed exposition of the subject. We were particularly anxious to avoid a set of lectures that dealt solely with the theory of the subject, because much of the interest in chemically induced magnetic polarization is due to its usefulness in applications to chemical problems: it is a real chemical tech­ nique, not just an amusing diversion for theoreticians. We set about organizing the course with the idea of making it useful to people who wanted to use the technique (for, after all, in the case of nuclear polarization, CIDNP, the technique can be used in any laboratory with minor modification of standard equipment).