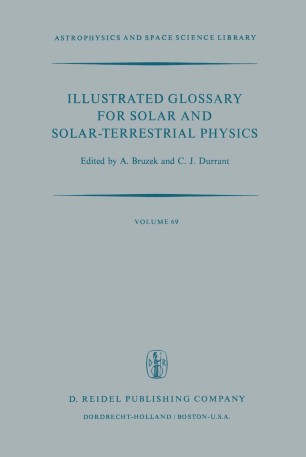 At the XV. General Assembly of the International Astronomical Union in Sydney 1973, Commission 10 for Solar Activity requested the incoming Organising Committee to establish a small group to recommend a standard nomenclature for solar features and to prepare an illustrated text which would clear the jungle of terms for the benefit of solar physicists as well as of theoreticians and research workers in related fields. The challenge was taken up by the president of Commission 10, Prof. K. O. Kiepenheuer, and his persuasive advocacy has led eventually to the present book. In the course of the work, the declared aim but not the basic purpose was revised. Rather than prepare a list of standard terms, we have preferred to collect together all the terms that appear in current English-language literature. Synonyms and partially overlapping terms are all recorded for the most part without prejudice. Each has been defined as exactly as possible with the hope that in the future they may be used and understood without ambiguity. It would be a step on the road to standardisation if these terms were not re-used for new phenomena. New observations and new theories will lead to reappraisals and redefinitions so the Glossary is intended more as a guide to the present situation than as a rule-book.