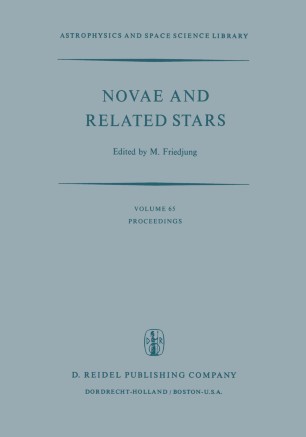 Proceedings of an International Conference Held by the Institut D’Astrophysique, Paris, France, 7 to 9 September 1976

Michael Friedjung Though known since antiquity, novae are still poorly under­ stood and present many problems. There has tended to be a lack of communication between theoreticians and observers and between different schools of thought, in spite of the advances of recent years in certain directions (observations of ordinary novae at minimum and of dwarf novae, theory of the causes of the explosion, etc ••• ). The meeting whose proceedings are contained in this volume was organized to stimulate a confron­ tation between the different ideas and results. The subject has changed a lot since 1963, when the previous international meeting was held. There were 61 participants at the conference from 17 countries, so very many groups ~oing research in the field of novae were represented. The reader will see that the subject has become more physical (we know for instance that the binary nature of novae is essential) but much work remains to be done. There is still a large gulf between theory and observation. May he find here many new ideas for future research! I would like to thank the French Centre National de la Recherche Scientifique for providing financial help. I must also thank the other members of the scientific committee (Profs and Drs Bath, Mustel, Payne-Gaposchkin, Sparks and Warner) and of the local committee (Audouze, Mrs Steinberg, Vauclair).