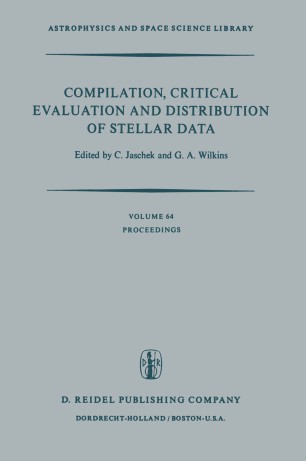 Proceedings of the International Astronomical Union Colloquium No. 35, held at Strasbourg, France, 19–21 August, 1976

The principal purpose of IAU Colloquium No. 35 was to discuss those aspects of the techniques of the compilation, evaluation, and distribution of data that are common to astrometry, photometry and spectrometry of stars and stellar systems. In the announcement of the Colloquium, it was suggested that there would be special emphasis on the techniques of quality control, and on the standards for the presentation of numerical data in both printed and com­ puter-readable form. As the meeting progressed it became clear that the lack of a standard, unambiguous system for the identifi­ cation of stellar objects was a source of much confusion and inefficiency in the use of existing data files. This and other such matters were the subject of further discussions by Commission 5 at the General Assembly of the International Astronomical Union (IAU), which was held at Grenoble during the following fortnight, 24 August - 2 September 1976. The proposal for the Colloquium was prepared by J. Jung, who was then Director of the Centre des Donnees Stellaires at Stras­ bourg, and G. A. Wilkins, Chairman of the IAU Working Group on Numerical Data, and was accepted by the IAU Executive Committee on the recommendation of the President of Commission 5, with the support of Commissions 25, 29 and 45. The Scientific Organising Committee consisted of W. Fricke, B. Hauck, C. Jaschek, J. Jung, B. Kukarkin, P. Lacroute, A. Underhill and G. A. Wilkins (Chair­ man). The Local Organising Committee consisted of A.