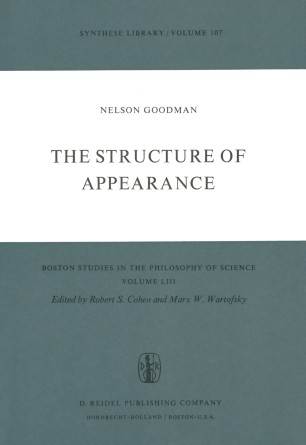 Part of the Boston Studies in the Philosophy of Science book series (BSPS, volume 53)

With this third edition of Nelson Goodman's The Structure of Appear­ ance, we are pleased to make available once more one of the most in­ fluential and important works in the philosophy of our times. Professor Geoffrey Hellman's introduction gives a sustained analysis and appreciation of the major themes and the thrust of the book, as well as an account of the ways in which many of Goodman's problems and projects have been picked up and developed by others. Hellman also suggests how The Structure of Appearance introduces issues which Goodman later continues in his essays and in the Languages of Art. There remains the task of understanding Good­ man's project as a whole; to see the deep continuities of his thought, as it ranges from logic to epistemology, to science and art; to see it therefore as a complex yet coherent theory of human cognition and practice. What we can only hope to suggest, in this note, is the b. road Significance of Goodman's apparently technical work for philosophers, scientists and humanists. One may say of Nelson Goodman that his bite is worse than his bark. Behind what appears as a cool and methodical analysis of the conditions of the construction of systems, there lurks a radical and disturbing thesis: that the world is, in itself, no more one way than another, nor are we. It depends on the ways in which we take it, and on what we do.