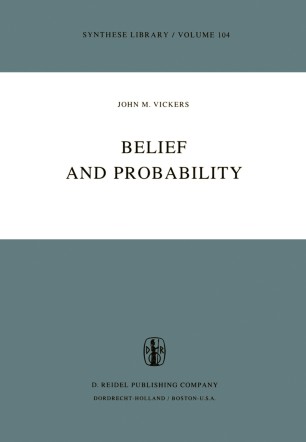 1. A WORD ABOUT PRESUPPOSITIONS This book is addressed to philosophers, and not necessarily to those philosophers whose interests and competence are largely mathematical or logical in the formal sense. It deals for the most part with problems in the theory of partial judgment. These problems are naturally formulated in numerical and logical terms, and it is often not easy to formulate them precisely otherwise. Indeed, the involvement of arithmetical and logical concepts seems essential to the philosophies of mind and action at just the point where they become concerned with partial judgment and" belief. I have tried throughout to use no mathematics that is not quite elementary, for the most part no more than ordinary arithmetic and algebra. There is some rudimentary and philosophically important employment of limits, but no use is made of integrals or differentials. Mathematical induction is rarely and inessentially employed in the text, but is more frequent and important in the apP'endix on set theory and Boolean algebra. • As far as logic is concerned, the book assumes a fair acquaintance with predicate logic and its techniques. The concepts of compactness and maximal consistency turn out to have important employment, which I have tried to keep self-contained, so that extensive knowledge of meta­ logical topics is not assumed. In a word, the book presupposes no more logical facility than is customary among working philosophers and graduate students, though it may call for unaccustomed vigor in its application.