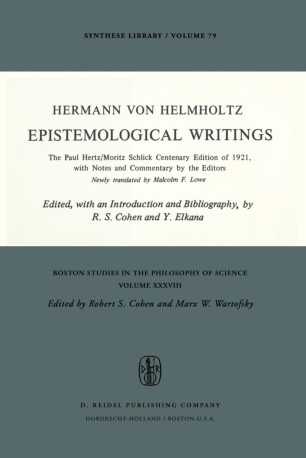 Part of the Boston Studies in the Philosophy of Science book series (BSPS, volume 37)

[1977] Hermann von Helmholtz in the History of Scientific Method In 1921, the centenary of Helmholtz' birth, Paul Hertz, a physicist, and Moritz Schlick, a philosopher, published a selection of his papers and lectures on the philosophical foundations of the sciences, under the title Schriften zur Erkenntnistheorie. Combining qualities of respect and criticism that Helmholtz would have demanded, Hertz and Schlick scrupulously annotated the texts. Their edition of Helmholtz was of historical influence, comparable to the influence among contemporary mathematicians and philosophers of Hermann Weyl's annotated edition in 1919 of Riemann's great dissertation of 1854 on the foundations of geometry. For several reasons, we are pleased to be able to bring this Schlick/ Hertz edition to the English-reading world: first, and primary, to honor the memory of Hermann von Helmholtz; second, as writings of historical value, to deepen the understanding of mathematics and the natural sciences, as well as of psychology and philosophy, in the 19th centur- for Helmholtz must be comprehended within at least that wide a range; third, with Schlick, to understand the developing empiricist philosophy of science in the early 20th century; and fourth, to bring the contributions of Schlick, Hertz, and Helmholtz to methodological debate in our own time, a half century later, long after the rise and consolidation of logical empiricism, the explosion of physics since Planck and Einstein, and the development of psychology since Freud and Pavlov.