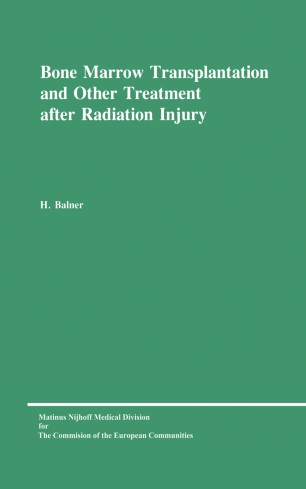 Bone Marrow Transplantation and Other Treatment after Radiation Injury

A review prepared for the Commission of the European Communities, Directorate-General Research, Science and Education (Biology-Medical Research)

Acute radiation injury in man has been amply reviewed in the past decades (1-8). Information for those reviews was mainly derived from the Hiroshima and Nagasaki experience (3), from radiation accidents as a con­ sequence of testing nuclear weapons and the application of nuclear energy (9-13) and from the intentional irradiation of patients, mostly for the treatment of malignancies and/or as conditioning for transplantation (14-20). Further, a large body of data derived from animal experimentation has led to cautious extrapolations to the human situation (14). An elaborate review dealing with early somatic effects of radiation in a man was published by UNSCEAR ) in 1962 (2). It was supplemented in 1969 with a similar document dealing mostly with radiation-induced chromosome aberra­ tions, the effects of radiation on the nervous system and, radio-active contamination of the environment by nuclear testing (21). In a more recent UNSCEAR report (1972) the main topics were genetic effects, carcinogenesis and effects of radiation on the immune response (22). The early effects of radiation in man were also expertly and comprehensively reviewed in a report by the United States National Research Council in 1967 (23).