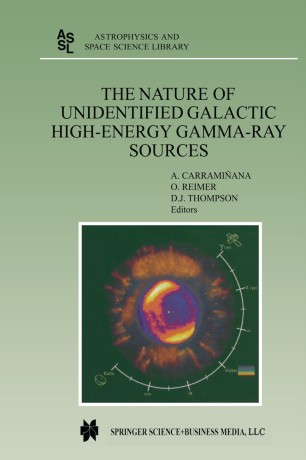 Proceedings of the Workshop held at Tonantzintla, Puebla, México, 9-11 October 2000

The Energetic Gamma-Ray Experiment Telescope (EGRET) instru­ ment on the Compton Gamma-Ray Observatory left as a legacy its Third Catalog of High Energy Gamma-Ray Sources, whose detections include a large number of blazars, some pulsars, the Large Magellanic Cloud and a solar flare. Most of the newly discovered objects - a majority of the catalog -are unidentified sources, with a clearly predominant Galactic population. Are all these radio-quiet pulsars, like Geminga, or is there a novel type of celestial object, awaiting identification? In spite of the limited angular resolution provided by EGRET and COMPTEL, there is still much to learn about unidentified ,-ray sources: correlation studies, multiwavelength observations and theoretical work can provide valuable clues, specially if these efforts are carried out in a coordinated manner. The aim of this workshop, held from October 9 to 11, 2000, at the Instituto N acional de Astrofisica, Optica y Electronica, at Tonantzintla, Mexico, was to gather experts on the subject, including observational as­ tronomers specialized in other regions of the electromagnetic spectrum, in an effort to address the question of the Nature of Galactic high-energy gamma-ray sources, both from the theoretical and observational perspec­ tive, and elaborate schemes for future identification studies which can make use of existing and forthcoming facilities.