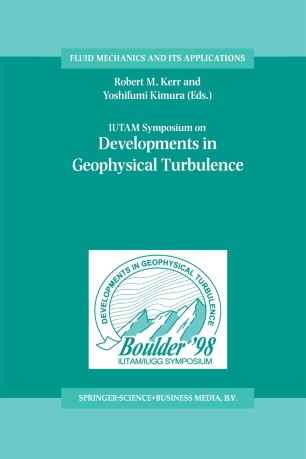 Part of the Fluid Mechanics and Its Applications book series (FMIA, volume 58)

This symposium continues a long tradition for IUGGjIUTAM symposia going back to "Fundamental Problems in Thrbulence and their Relation to Geophysics" Marseille, 1961. The five topics that were emphasized were: turbulence modeling, statistics of small scales and coherent structures, con­ vective turbulence, stratified turbulence, and historical developments. The objective was to consider the ubiquitous nature of turbulence in a variety of geophysical problems and related flows. Some history of the contribu­ tions of NCAR and its alumni were discussed, including those of Jackson R Herring, who has been a central figure at NCAR since 1972. To the original topics we added rotation, which appeared in many places. This includes rotating stratified turbulence, rotating convective turbulence, horizontal rotation that appears in flows over terrain and the role of small­ scale vorticity in many flows. These complicated flows have recently begun to be simulated by several groups from around the world and this meeting provided them with an excellent forum for exchanging results, plus inter­ actions with those doing more fundamental work on rotating stratified and convective flows. New work on double diffusive convection was given in two presentations. The history of Large Eddy Simulations was presented and several new approaches to this field were given. This meeting also spawned some interesting interactions between observational side and how to inter­ pret the observations with modeling and simulations around the theme of particle dispersion in these flows.