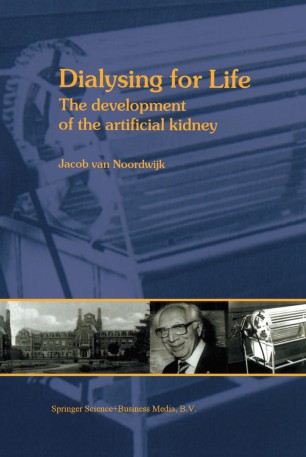 The Development of the Artificial Kidney

Seeing a patient die under his hands because there is no adequate treatment causes an emotion and a frustration in a doctor, which sometimes stimulates him to try to develop a new type of treatment. Seeing so many wounded young soldiers die due to renal failure in World War I incited the German doctor Georg Haas to try to develop an artificial kidney. He had to give up in despair in 1928.
Ten years later doctor Willem Kolff saw a young man die in his ward in the University Hospital of Groningen due to renal failure. By that time two essential factors for an artificial kidney had become available: a drug to keep the blood from clotting outside of the body and an efficient dialysing membrane through which waste substances can pass from the blood into the dialysing fluid. Kolff succeeded in creating the rotating artificial kidney which he started using in the town hospital of Kampen in 1943. The rotation of this artificial kidney started a revolution that made it possible for thousands of kidney patients all over the world to keep on living - and sometimes to forget their disease for the time being. In addition it gave rise to the development of other artificial organs such as the heart-lung machine, the artificial heart and the artificial eye.
Doctor Jacob van Noordwijk, the author of this book, was Kolff's first assistant in the treatment of the first 15 patients. How Kolff succeeded in spite of all the limitations imposed by the German occupation of the Netherlands and in spite of the absence of antibiotics and other medical tools which are common nowadays makes a story which may sound incredible. Yet it did happen and visitors to the town of Kampen can still see the hospital building where it all took place.