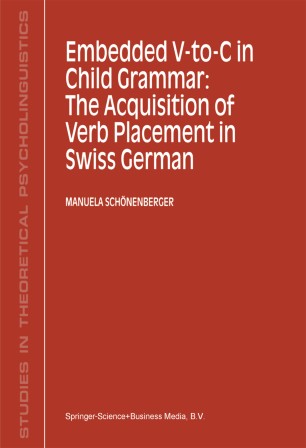 Embedded V-To-C in Child Grammar: The Acquisition of Verb Placement in Swiss German

How children acquire competence in verb placement in languages in which verb placement in matrix clauses does not coincide with that in embedded clauses is not well understood. Verb-Second languages like German and Dutch display the verb-final pattern in embedded clauses, which can be confusing for a developing child. This book addresses this problem in the context of Swiss German, itself a Germanic dialect.
Numerous examples are given of natural language produced by two children who were consistently followed between the ages of 4 and 6. Unexpectedly, since previous literature has suggested that children master verb placement very early in their linguistic development, these children move the verb in any type of embedded clause, leading to many verb-placement errors.
After introducing the problem and describing the data in detail, a technical analysis is developed in terms of a minimally split-CP, which is rather successful in accounting for these data.
The book should interest advanced students and researchers in both language acquisition and syntax.