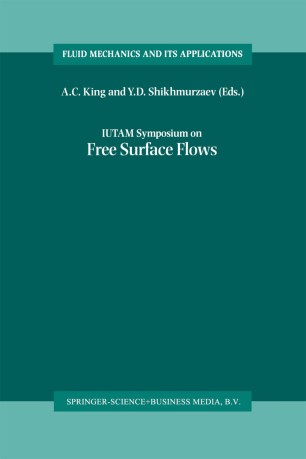 Part of the Fluid Mechanics and Its Applications book series (FMIA, volume 62)

Free surface flows arise in the natural world, physical and biological sciences and in some areas of modern technology and engineering. Exam­ ples include the breaking of sea waves on a harbour wall, the transport of sloshing fluids in partly filled containers, and the design of micronozzles for high speed ink-jet printing. Apart from the intrinsic mathematical challenge in describing and solving the governing equations, there are usually important environmental, safety and engineering features which need to be analysed and controlled. A rich variety of techniques has been developed over the past two decades to facilitate this analysis; singular perturbations, dynamical systems, and the development of sophisticated numerical codes. The extreme and sometimes violent nature of some free surface flows taxes these methods to the limit. The work presented at the symposium addressed these limits and can be loosely classified into four areas: (i) Axisymmetric free surface flows. There are a variety of problems in the printing, glass, fertiliser and fine chemical industries in which threads of fluid are made and controlled. Presentations were made in the areas of pinch-off for inviscid and viscous threads of fluid, recoil effects after droplet formation and the control of instability by forced vibration. (ii) Dynamic wetting. The motion of three phase contact lines, which are formed at the junction between two fluids and a solid, plays an important role in fluid mechanics.