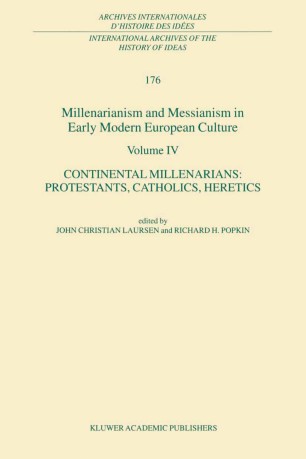 Any number of misconceptions about millenarians and messianism in the early modern period will be laid to rest by a reading of this volume. It is too often thought that millenarianism was largely an English phenomenon. One of the reasons for bringing these studies together is to show, as Martin Mulsow puts it, that we can understand this European-wide movement as a "millenarian international" in analogy with the later "socialist international". Another misconception is that millenarianism and messianism were a world apart from mainstream developments in intellectual history; but, as Mulsow also insists, a proper understanding of millenarianism places it in the context of the growth and stabilization of science, material progress, and political reform. A third mistake is to conclude too quickly that millenarianism and messianism have formed a single, monolithic bloc in history; but we learn in this volume that there were all sorts of millenarians. Readers of this volume will be struck by at least two things. One is the sheer numbers of millenarian thinkers to be found throughout Europe in the early modern period, especially north of the Mediterranean. We will not list them all 1 here, but the index to this book contains dozens and dozens of them. The second striking point is the amount of work that remains to be done. For every millenarian that we explore and explain here, several are mentioned about which little is known.