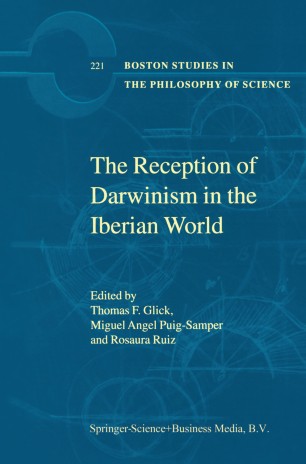 The Reception of Darwinism in the Iberian World

Part of the Boston Studies in the Philosophy of Science book series (BSPS, volume 221)

I Twenty-five years ago, at the Conference on the Comparative Reception of Darwinism held at the University of Texas in 1972, only two countries of the Iberian world-Spain and Mexico-were represented.' At the time, it was apparent that the topic had attracted interest only as regarded the "mainstream" science countries of Western Europe, plus the United States. The Eurocentric bias of professional history of science was a fact. The sea change that subsequently occurred in the historiography of science makes 1972 appear something like the antediluvian era. Still, we would like to think that that meeting was prescient in looking beyond the mainstream science countries-as then perceived-in order to test the variation that ideas undergo as they pass from center to periphery. One thing that the comparative study of the reception of ideas makes abundantly clear, however, is the weakness of the center/periphery dichotomy from the perspective of the diffusion of scientific ideas. Catholics in mainstream countries, for example, did not handle evolution much better than did their corre1igionaries on the fringes. Conversely, Darwinians in Latin America were frequently better placed to advance Darwin's ideas in a social and political sense than were their fellow evolutionists on the Continent. The Texas meeting was also a marker in the comparative reception of scientific ideas, Darwinism aside. Although, by 1972, scientific institutions had been studied comparatively, there was no antecedent for the comparative history of scientific ideas.