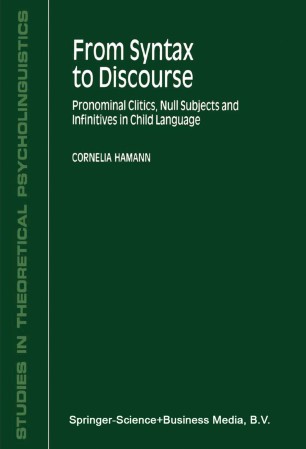 From Syntax to Discourse

claim is that such morphological processes can be learnt without symbolization and innate knowledge. See Rumelhart and McClelland (1986) for the original model of past tense acquisition, Plunkett and Marchman (1993), Nakisa, Plunkett and Hahn (1996) and Elman et al. (1996) for developments and extensions to other morphological processes, and Marcus et al. (1992) and Pinker and Prince (1988) for criticism. One line of investigation supporting the view of language as a genetic endowment is closely linked to traditional research on language acquisition and argues as follows: If language is innate there must be phenomena that should be accessible from birth in one form or the other. Thus it is clear that the language of children, especially young children and preferably babies should be investigated. As babies unfortunately don't talk, the abilities that are available from birth must be established in ways different from the usual linguistic analysis. Psycholinguistic research of the last few years has shown that at the age of 4 and 8 months and even during their first week of life children already have important language skills. From the fourth day, infants distinguish their mother tongue from other languages. From the first months children prefer the sound of speech to 'other noise'. At the age of 4 months, infants prefer pauses at syntactic boundaries to random pauses.