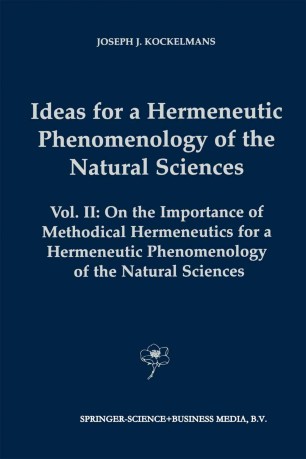 Ideas for a Hermeneutic Phenomenology of the Natural Sciences

Volume II: On the Importance of Methodical Hermeneutics for a Hermeneutic Phenomenology of the Natural Sciences

Part of the Contributions to Phenomenology book series (CTPH, volume 46)

Ideas for Hermeneutic Phenomenology of Natural Sciences (published in 1993 as volume 15 of this series) comprised mainly ontological reflections on the natural sciences. That book explained why the natural sciences must be considered inherently interpretive in character, and clarified the conditions under which scientific interpretations are "legitimate" and may be called "true".

This companion volume focuses on methodological issues. Its first part elucidates the methodical hermeneutics developed in the 19th century by Boeckh, Birt, Dilthey, and others. Its second part, through the use of concrete examples drawn from modern physics as it unfolded from Copernicus to Maxwell, clarifies and "proves" the main points of the ontologico-hermeneutical conception of the sciences elaborated in the earlier volume. It thereby both illuminates the most important problems confronting an ontologico-phenomenological approach to the natural sciences and offers an alternative to Kuhn's conception of the historical development of the natural sciences.