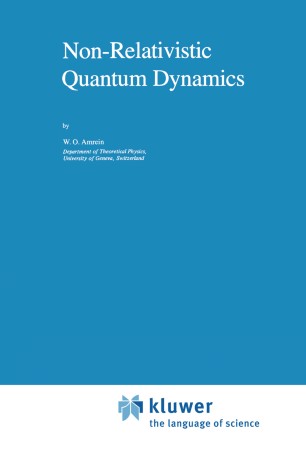 The bulk of known results in spectral and scattering theory for Schrodinger operators has been derived by time-independent (also called stationary) methods, which make extensive use of re­ solvent estimates and the spectral theorem. In very recent years there has been a partial shift of emphasis from the time-indepen­ dent to the time-dependent theory, due to the discovery of new, essentially time-dependent proofs of a fair number of the principal results such as asymptotic completeness, absence of singularly con­ tinuous spectrum and properties of scattering cross sections. These new time-dependent arguments are somewhat simpler than the station­ ary ones and at the same time considerably closer to physical in­ tuition, in that they are based on a rather detailed description of the time evolution of states in configUration space (whence the designation "geometric methods" used by some authors). It seemed interesting to me to present some of these new meth­ ods from a strictly time-dependent point of view, by considering as the basic mathematical object strongly continuous unitary one­ parameter groups and avoiding the spectral theorem completely. The present volume may be viewed as an essay in this spirit. It is an extended version of a course taught in 1979 at the University of Geneva to undergraduate students enrolled in mathematical physics.