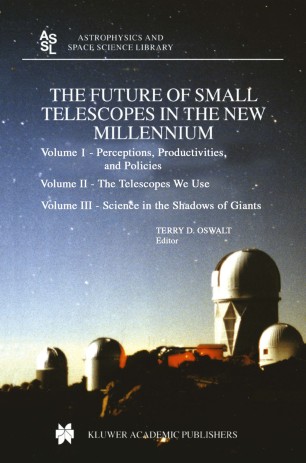 The Future of Small Telescopes in the New Millennium

The motivation for these volumes is to provide a vision for the future of small telescopes. While this is an admirable task, ultimately I believe that­ as happens all the time in science - the prognostications will be overtaken by a rapidly changing scientific reality. As Virginia Trimble points out in chapter 1, the kinds of big questions that face us as astronomers today are rather different than the ones that drove the construction of astronomical facilities through much of the twentieth century. Right now, it appears that small telescopes will not have a lot of influence in answering those questions, though they will of course contribute enormously to the many issues discussed throughout the three volumes. Weare on the verge of opening a whole new parameter space that may revolutionize the way we think of small telescopes and their role in astronomy - the domain of the rapidly variable sky. While the LSST is the most prominent example, it is a long way in the future. Nemiroff & Rafert (chapter 2) consider the value of monitoring large parts of the sky on a continuous basis, using technology similar to a webcam. They have installed their CONCAM2 at four locations, including Kitt Peak. A related project, built and operated by the Harvard graduate student Gaspar Bakos - HAT-l (Hungarian Automated Telescope) - also is in operation at Kitt Peak.