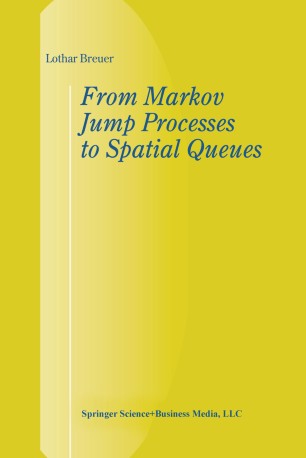 From Markov Jump Processes to Spatial Queues aims to develop a unified theory of spatial queues that yields concrete results for the performance analysis of mobile communication networks. A particular objective is to develop the most natural generalization of existing concepts (e.g. the BMAP) toward the needs of mobile communication networks. To these belong the spatial distribution of batch arrivals and users in the system as well as time-inhomogeneous (e.g. periodic) arrival intensities and user movements.

One of the major recent challenges for the stochastic modelling of communication systems is the emergence of wireless networks, which are used by more and more subscribers today. The main new feature of those, which is not covered by classical queuing theory, clearly is the importance of the user location within the area that is served by the base stations of the network.

In the framework of queuing theory, this opens up the natural extension of classical queuing models towards queues with a structured space in which users are served. The present book is intended to introduce this extension under the name of spatial queues. The main point of view and the general approach will be that of Markov jump processes. We start with a closer look into the theory. Then we present new results for the theory of stochastic processes as well as for classical queuing theory. Finally we introduce the new concepts of spatial Markovian arrival processes and spatial queues.

The main text is divided into three parts. The first part provides a new presentation of the theory of Markov jump processes. We derive a number of new results, especially for time-inhomogeneous processes, which have been neglected too much in the current textbooks on stochastic processes. For the first time, the class of Markov-additive jump processes is analysed in detail. This extends and unifies all Markovian arrival processes that have been proposed up to now (including arrivals for fluid queues) and provides a foundation for the subsequent introduction of spatial Markovian arrival processes.

The second part contains new results for classical queues with BMAP input. These include the first explicit formulae for the distribution of periodic queues. The class of fluid Markovian arrival processes is introduced, and we give statistical estimates for the parameters of a BMAP.

In the third part, the concepts of spatial Markovian arrival processes (abbreviated: SMAPs) and spatial queues are introduced. After that, periodic spatial Markovian queues are analysed as a model for the cells of a wireless communication network.
From Markov Jump Processes to Spatial Queues is intended to reach queuing theorists, researchers in the field of communication systems, as well as engineers with some background in probability theory. Furthermore, it is suitable as a textbook for advanced queuing theory on the graduate or post-graduate level.