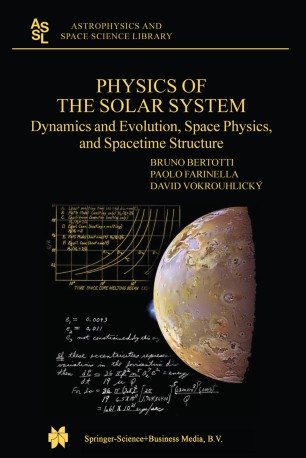 Physics of the Solar System

This book is a direct sequel to: B. Bcrtotri and P. Farinclla, "Physics of the Earth and the Solar System, Dynamics and Evolution. Space Navigation. Spa­ cc-Time Structure" (Kluwcr Academic Publishers, 1990). Nearly 15 years af­ tcr its publication it became evident that the volume was in need of a new edition to keep up with the outstanding progress and the changing perspectives in this field. David Vokrouhlicky agreed to collaborate on the project and be the third author. On March 25, 2000. after a tong illness and a heart transplant. Paolo Farinella passed away. We then decided that. rather than aiming at a second edition, it made more sense to rewrite the book anew. While its basic content and the structure of the chapters are the same, important new topics have been added, including the extrasolar planetary systems, transneptunian objects. accurate determination of reference frames and new space projects. Greater relevance has been given to scmiquantitarive discussions before intro­ ducing formal developments: many figures have been added and updated and several errors corrected. More emphasis has given to the solar system, whereas geophysical topics have been left at a less advanced level. To mark this change the slightly differ ent title "Physics of the Solar System" was chosen. We wish to dedicate this book to the memory of Paolo Farinella. an out­ standing scientist, an invaluable collaborator and a dear friend.