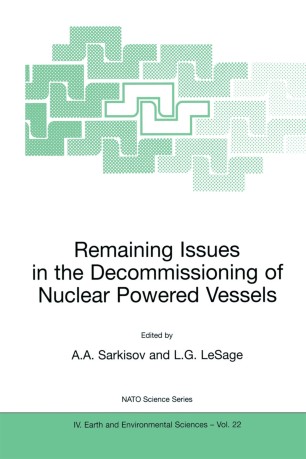 Remaining Issues in the Decommissioning of Nuclear Powered Vessels

Including Issues Related to the Environmental Remediation of the Supporting Infrastructure

The Russian NATO Advanced Research Workshop on "Scientific Problems and Unresolved Issues Remaining in the Decommissioning of Nuclear Powered Vessels and in the Environmental Remediation ofTheir Supporting Infrastructure," was held in Moscow, Russia at the Presidium of the Russian Academy of Sciences on April 22-24, 2002. This was the third in this series of North Atlantic Treaty Organization (NATO) sponsored workshops in Moscow on nuclear vessel decommissioning. The first one was in June 1995 and served to focus international attention on the problems of nuclear vessel decommissioning in Russia and elsewhere. The second one was in November 1997 and it focused on the risks associated with nuclear vessel decommissioning. Attendance at the current workshop was approximately 100 with participants form Russia, United States, Norway, France, Denmark, Germany, Japan, Korea, NATO, and the European Union. The Workshop was sponsored and funded by the Security-Related Civil Science and Technology Program of the Scientific and Environmental Affairs Division ofNATO. Within Russia, the Workshop was sponsored and supported by the Russian Academy of Sciences, Minatom of Russia, Rossudostroenie, Ministry of Industry and Science of Russia, and the Russian Navy. Within the U.S., the Workshop was supported by the U.S. Department of Energy. The sponsorship and support of all of the above organizations are gratefully acknowledged.