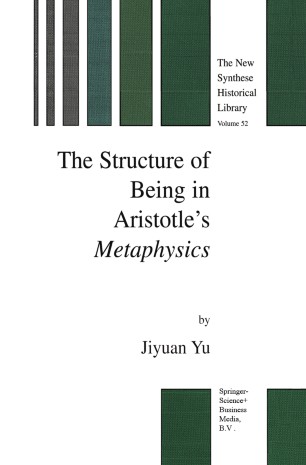 The Structure of Being in Aristotle’s Metaphysics

In his Metaphysics, Aristotle claims that he is seeking to establish a science of being. Being, at the most general level, is divided by Aristotle into the following four types: 1. Accidental being 2. Being as truth 3. Potential/actual being l 4. Per se being Per se (kath hauto) being can also be translated as "being in its own right" or "intrinsic being". This type of being has been referred to by Aristotle in different ways. The list of per se beings includes substance, quantity, quality, place, time, etc. , and this is also the list ofcategories. At Meta. ix. l, 1045b28 Aristotle calls this list the "categories of being" (hai kategoriai tou ontos). At Meta. vi. 2, 1026a36 and ix. 1O, 1051a33-b2 per se being is called "being with reference to the figures ofpredication" (ta schemata tes kategorias, or "figures ofcategories,,). 2 Of these four types of being, accidental being is briefly treated in Meta. vi. 2-3 and there Aristotle claims that the study of accidental being can be dismissed on the grounds that accidental being is indeterminate and cannot be 3 the object ofknowledge. He also does not pay much attention to being as truth and treats it briefly in two short texts: Meta. viA and ix. 1O.