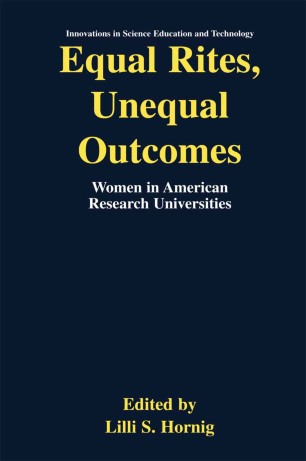 Part of the Innovations in Science Education and Technology book series (ISET, volume 15)

Thirteen years ago, in June 1988, the Radcliffe Classof1953 celebrated its 35th Reunion. Amidst the festivities, we who participated repeatedly asked ourselves the same two questions: Is Harvard as sexist as it was when we were undergraduates? If not, what is the status ofwomen at Harvard today? To find the answers we formed an ad hoc committee and charged the members to report back to the class in five years. The committee interviewed selected senior and junior Harvard faculty, Harvard and Radcliffe administrators, students, and alumni/ae. We identified and studied Harvard and Radcliffe reports on their institu­ tions and on their student organizations. We contributed to and participated in a 1990 Radcliffe Focus Group, "ASurveyofAlumnae and Undergraduate Perceptions. " We found that the University was not as sexist in 1988 as it had been in 1953. Yet the status ofwomen, though improved, remained quite unequal to thatofmen. (Radcliffe College was organizationally separate from Harvard University until 1977, when a "non-merger merger" was implemented. However, Radcliffe had no fac­ ulty of its own and employed Harvard faculty to teach its students, in strictly separate classes until World War II. The merger effort was com­ pleted in 1999 with the complete integration ofthe two institutions and the formation ofthe Radcliffe Institute for Advanced Study, a "tub on its own bottom" like other Harvard graduate and professional schools. ) In 1993 the Class of'53 voted unanimously to form the Commit­ tee for the EqualityofWomen at Harvard (CEWH).