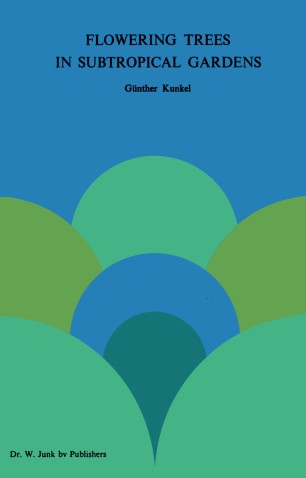 In 1969 volume I of 'Arboles Ex6ticos' appeared in Las Palmas de Gran Canaria, published in Spanish by the Island Council (Cabildo Insular). Volume II was to have dealt with a further 100 or so Dicotyledons, and volume III to have closed the cycle with Gymnosperms and the tree-like Monocotyledons. Neither of the latter having been published it was suggested that a totally revised and enlarged version of the first book be prepared for Dr. W. Junk, Publishers, The Hague. We are most obliged to Mr. S. P. Bakker and the Board of Directors for their interest in the present work, hoping that it will fill a gap and help both residents and visitors to get to know the amazingly rich exotic flora that is to be encountered in Mediterranean and Canarian parks and gardens. A second volume is in preparation and will concentrate on the bushes and shrubby trees left out in this one. In Flowering Trees in Subtropical Gardens special attention is given to species found in Canary gardens. As, however, most trees described are widely distributed in other regions with a similar Mediterranean climate, it is hoped that this guide may be of use in gardens of the subtropics in general. Several of the species selected here are little known in gardens, hardly ever found illustrated in current reference books and have therefore been included for interest's sake.