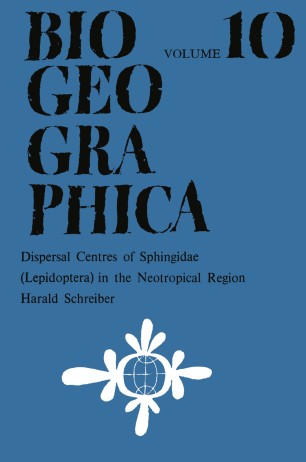 Dispersal Centres of Sphingidae (Lepidoptera) in the Neotropical Region

The term 'dispersal centre' literally refers to the place from which a dispersal process started. However, it also implies the location of a centre of diversity, frequently even a recent one, as well as the location of a preservation centre or refuge during regressive phases in less remoted periods of earth's history, and that of a possible speciation centre. The latter may have been the place of differentia­ tion of subspecies, or species, provided that the isolation period has been suffi­ ciently long. The term deliberately brings the dynamics to prominence which is inherent in the process of dispersal. This dynamics is neither properly recognized when considering ranges 'whose recent structures more or less force us to consider them ,as static entities' (DE LATTIN 1967, p. 16)*, nor adequately taken into account by systematic typology. Yet, it is, in fact, the change that takes place in a range, which is of great significance in evolutionary genetics. In the case of range regressions which may lead to a diminution or rupture of the range pattern according to the pressure of the endogenous or exogenous triggering factors, subsequently arising distribution obstacles may result in a geographical isolation of partial populations or popula­ tion parts. Their sufficiently long spatial and reproductive isolation and the allele loss resulting from the change of the population size promote a divergent develop­ ment.