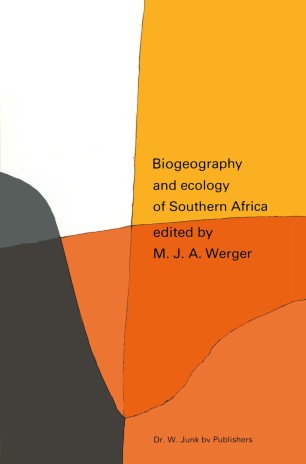 Biogeography and Ecology of Southern Africa

Southern Africa is certainly not a naturally bounded area so that there are several possibilities for delineating it and concepts about its extent. Wellington* discussed the various possibilities for delineation and suggested that one line stands out more clearly and definitely as a physical boundary than any other, namely the South Equatorial Divide, the watershed between the ZaIre, Cuanza and Rufiji Rivers on the one hand and the Z ambezi, Cunene and Rovuma Rivers on the other. This South Equatorial Divide is indeed a major line of separation for some organisms and is also applicable in a certain geographical sense, though it does not possess the slightest significance for many other groups of organisms, ecosystems or geographical and physical features of Africa. The placing of the northern boundary of southern Africa differs in fact strongly per scientific dis­ cipline and is also influenced by practical considerations regarding the possibilities of scientific work as subordinate to certain political realities and historically grown traditions. This is illustrated, for example, in such works as the Flora of Southern Africa, where the northern boundary of the area is conceived as the northern and eastern political boundaries of South West Africa, South Africa and Swaziland. Botswana, traditionally included in the area covered by the Flora Zambesiaca, thus forms a large wedge in 'Southern Africa'.