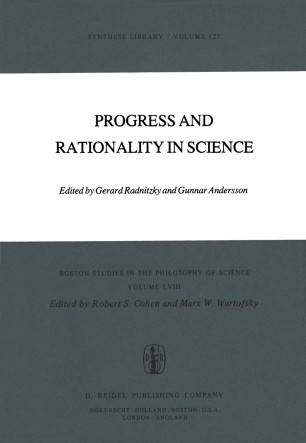 Progress and Rationality in Science

Part of the Boston Studies in the Philosophy of Science book series (BSPS, volume 58)

This collection of essays has evolved through the co-operative efforts, which began in the fall of 1974, of the participants in a workshop sponsored by the Fritz Thyssen Foundation. The idea of holding one or more small colloquia devoted to the topics of rational choice in science and scientific progress originated in a conversation in the summer of 1973 between one of the editors (GR) and the late Imre Lakatos. Unfortunately Lakatos himself was never able to see this project through, but his thought-provoking methodology of scientific research programmes was ably expounded and defended by his successors. Indeed, this volume continues and deepens the debate inaugurated in Criticism and the Growth of Knowledge (edited by Imre Lakatos and Alan Musgrave), a book which grew out of a conference held in 1965. That debate has continued during the years that have passed since that conference. The group of discussions about the place of rationality in science which have been held between those who emphasize the history of science (with Feyerabend and Kuhn as the most prominent exponents) and the critical rationalists (Popper and his followers), with Imre Lakatos defending a middle ground, these discussions were seen by almost all commentators as the most important event in the philosophy of science in the last decade. This problem area constituted the central theme of our Thyssen workshop. The workshop operated in the following manner.