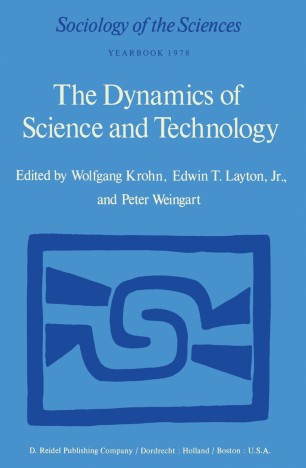 The Dynamics of Science and Technology

Social Values, Technical Norms and Scientific Criteria in the Development of Knowledge

Part of the Sociology of the Sciences A Yearbook book series (SOSC, volume 2)

The interrelations of science and technology as an object of study seem to have drawn the attention of a number of disciplines: the history of both science and technology, sociology, economics and economic history, and even the philosophy of science. The question that comes to mind is whether the phenomenon itself is new or if advances in the disciplines involved account for this novel interest, or, in fact, if both are intercon­ nected. When the editors set out to plan this volume, their more or less explicit conviction was that the relationship of science and technology did reveal a new configuration and that the disciplines concerned with 1tS analysis failed at least in part to deal with the change because of conceptual and methodological preconceptions. To say this does not imply a verdict on the insufficiency of one and the superiority of any other one disciplinary approach. Rather, the situation is much more complex. In economics, for example, the interest in the relationship between science and technology is deeply influenced by the theoretical problem of accounting for the factors of economic growth. The primary concern is with technology and the problem is whether the market induces technological advances or whether they induce new demands that explain the subsequent diffusion of new technologies. Science is generally considered to be an exogenous factor not directly subject to market forces and, therefore, appears to be of no interest.