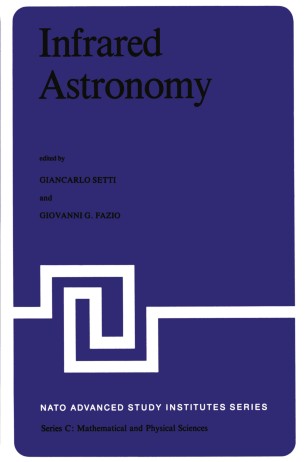 This volume contains a series of lectures presented at the 4th Course of the International School of Astrophysics, held in Erice (Sicily) from July 9 - July 20, 1977 at the "E. Majorana" Centre for Scientific Culture. The course was fully supported by a grant from the NATO Advanced Study Institute Programme. It was attended by 82 participants from 15 countries. Even though the infrared portion of the electromagnetic spectrum covers an extensive interval from the red region of the optical spectrum (10,000 A) to the microwave radio region (1 mm), its role in astronomy has been minimal until the last two decades. Until very recently, the only objects observed were the sun, the moon and the planets. A primary reason for this late development was the lack of sensitive detectors and the necessary cryogenic technology that must accompany their use. Recent progress in this technology has been paralleled by an ever increasing interest of astronomers in infrared observations, leading to a number of ex­ tremely important results in different branches of astronomy. This becomes evident when one realizes that in many astrophysical conditions most of the energy is found to be channeled into the infrared portion of the electromagnetic spectrum. Stars were detected that yield most of their radiation in the infrared; these objects present a new view of stellar evolution, both in the birth and death stages.