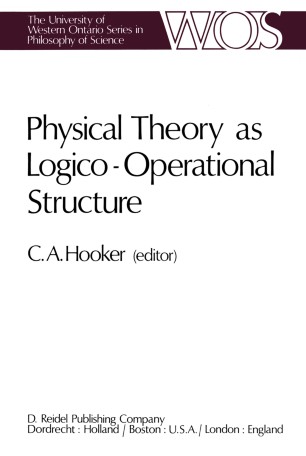 Part of the The University of Western Ontario Series in Philosophy of Science book series (WONS, volume 7)

In two earlier volumes, entitled The Logico-Algebraic Approach to Quan­ tum Mechanics (hereafter LAA I, II), I have presented collections of research papers which trace out the historical development and contem­ porary flowering of a particular approach to physical theory. One might characterise this approach as the extraction of an abstract logico-algebraic skeleton from each physical theory and the reconstruction of the physical theory as construction of mathematical and interpretive 'flesh' (e. g. , measures, operators, mappings etc. ) on this skeleton. The idea is to show how the specific features of a theory that are easily seen in application (e. g. , 'interference' among observables in quantum mechanics) arise out of the character of its core abstract structure. In this fashion both the deeper nature of a theory (e. g. , in what precise sense quantum mechanics is strongly statistical) and the deeper differences between theories (e. g. clas­ sical mechanics, though also a 'mechanics', is not strongly statistical) are penetratingly illuminated. What I would describe as the 'mainstream' logico-algebraic tradition is captured in these two collections of papers (LAA I, II). The abstract, structural approach to the characterisation of physical theory has been the basis of a striking transformation, in this century, in the understanding of theories in mathematical physics. There has emerged clearly the idea that physical theories are most significantly characterised by their abstract structural components.