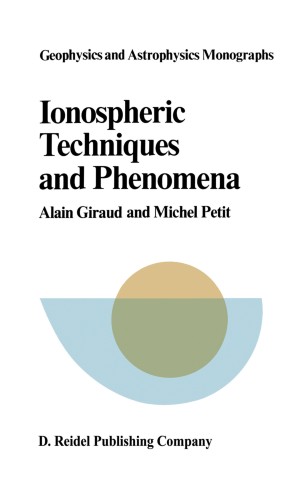 If our eyes were radio rather than optical wide-band detectors it is well known that for us the brightest object in the sky would still be the Sun; that planets, stars and the Milky Way would still shine feebly (and that we would still occasionally be blinded by man-made sources). What is less well known is that quite a different earthbound overcast would hover about us, with its climatic zones, its seasonal changes, its unpredictable storms and scintillating transparence. To be sure, we can get a sort of glimpse of this peculiar type of weather when we tune our receiver to radio broad­ casting from some remote spot, or photograph the Earth from space at certain specific wavelengths. Nevertheless no one has ever looked at the ionized shroud of the Earth without the help of sophisticated apparatus, and this is one of the reasons why in this domain the phenomena are not easily abstracted from the use of specific techniques. For generations, the study of the ionosphere has been deeply interwoven with the practice of radio communication and detection. Today however, ionospheric physics is best thought of as a branch of space physics; that part of physics which deals with processes at work in the solar system and methods developed for its exploration.