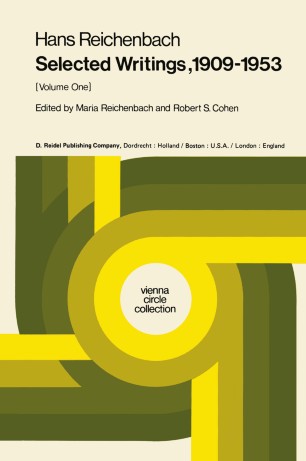 These two volumes form a full portrait of Hans Reichenbach, from the school boy and university student to the maturing and creative scholar, who was as well an immensely devoted teacher and a gifted popular writer and speaker on science and philosophy. We selected the articles for several reasons. Many of them have not pre­ viously been available in English; many are out of print, either in English or in German; some, especially the early ones, have been little known, and deal with subject-matters other than philosophy of science. The genesis and evolu­ tion of Reichenbach's ideas appeared to be of deep interest, and so we in­ cluded papers from four decades, despite occasional redundancy. We were, for example, pleased to include his extensive review article from the encyclo­ pedic Handbuch der Physik of 1929 on 'The Aims and Methods of Physical Knowledge', written at a time of creative collaboration between Reichenbach's Berlin group and the Vienna Circle of Schlick and Carnap. Reichenbach was a pioneer, opening new pathways to the solution of age-old problems in many fields: space, time, causality, induction and probability - philosophical analysis and interpretation of classical physics, relativity and quantum physics - logic, language, ethics, scientific explanation and methodology, critical appreciation and reconstruction of past metaphysical thinkers and scientists from Plato to Leibniz and Kant. Indeed, his own philosophical journey was initiated by his passage from Kant to anti-Kant.